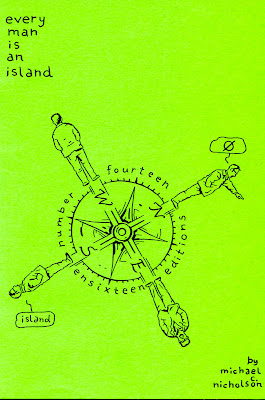 In the period between early Summer 2009 and early Summer 2010 I produced three new editions of Ensixteen material.
As of this writing that feels like a small amount of work for a year - especially given my rapid rate of productivity when I'm actually engaged in the process of writing and drawing new books. . . but there was too much other interference cutting across my concentration, usually from the direction of my salaried college tutor job but also personal matters, family illness and other things that were, frankly, more important.
My partner Mette Ambeck's links to the Doverodde Book Arts Centre, in Northern Denmark, sparked the 1st of these three editions – 'Every Man Is An Island'.
As part of the ongoing event there had been an open call for book arts pieces linked to the theme of 'Island'.
What resulted was a really enjoyable experience for me – with a narrative that allowed my usual Ensixteen alter ego to travel South to North up the length of Windermere as well as through time. Along the way I revealed stories from family and friend’s lives and history, tales from local communities, all tied to the geography of the place, islands included.
An arbitrary subject here gave me rich pickings, and two small incidents from the subsequent Leeds Contemporary Artists' Book Fair (March 2010) perfectly exemplify the strange, capricious connection to a readership at such events. 'Island' sold well enough, but two rapid sales in particular I found strangely pleasing - one to a girl in dark glasses who had lived for awhile on Canvey Island, in Essex and was drawn to the theme, and the other to a local PHd student who was studying the 'role of the island in art'.
They came, they saw, they asked brisk questions, they bought. 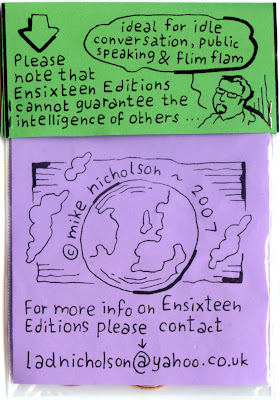 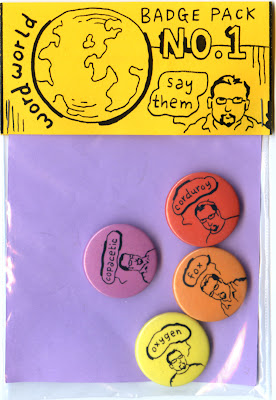 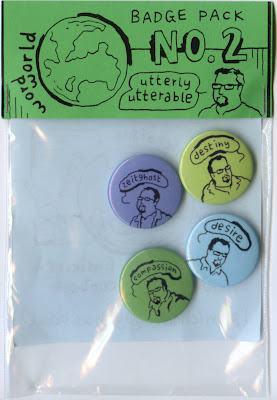 Ever weakened by an attraction for badges, I naturally succumbed a few years ago and Mette and I have produced (with the marvellous generosity of Better Badges in Tottenham (highly recommended) occasional sets and singles ever since. Best of all are the modest and likeable 'small' sized ones, with proper metal pins at back - an enduring classic which has proven very popular to an audience of varied ages. The sets celebrate my passion for language amongst other things - some words are to be said with relish, and in this supposed era of unbridled communication we stop less and less to roll them around our tongues and TASTE them.
Mmmmmm.
And none of that text-friendly abbreviation either, thank you very much.
Posted by n16holson at 10:27 No comments: 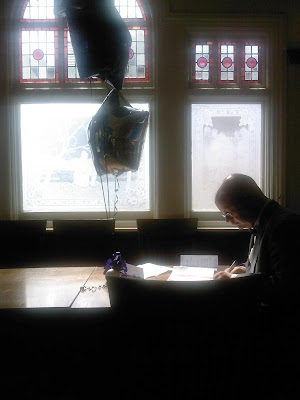