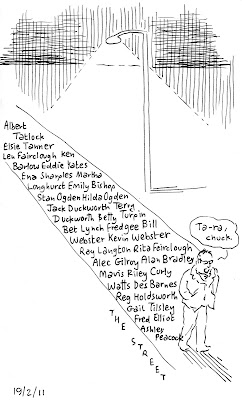 More text that never made the edit on the current project:

Granada Television represented a significant piece in the puzzle of 'The North' that I put together as a child.
It was a progressive, regional enterprise that unpicked the cultural monopoly represented by the alien BBC Received Pronunciation voice of London. Through Granada a regional accent that I recognized - the sardonic, flat Lancashire voice - entered the proliferating televisions then beginning to arrive in the homes of ordinary people. At Granada, in the pivotal years, the entrepreneur shook hands with the auteur and went for a drink. It embraced a new generation of drama writers, actors, directors and producers - and investigative journalism (the groundbreaking 'World In Action' from 1963 and 'Seven Up!' from 1964) with a global reach, to boot.
In my imagination, as I grew older - out on a limb in the Lake District – there coalesced a myth of Manchester formed from the wit of good writing and performances, plus provocative film-making with a heart. For the reality - hats off to the likes of Ray Gosling, Tony Wilson, Anna Ford, Pattie Caldwell, Gordon Burns, Trevor Hyett and Bob Greaves and, for the imagination, I'd like to tip the hat also to those behind 'The Squirrels', 'The Cuckoo Waltz', 'The Lovers' and – that most special police series (it's as if 'The Sweeney' were written by Pinter or Ibsen) 'Strangers' - starring Don Henderson, Dennis Blanch, John Ronane, Frances Tomelty, Fiona Mollison, Mark McManus and Thorley Walters.
Marvellous work.
And, in closing, none more marvellous than 'Coronation Street', which – at 50 years young, continues to flourish. The basic humanity that creator Tony Warren set in place with his initial episodes remains, and the constant thread of humour which leavens the dramatic mix is, I think, what sustains the show over the histrionics and misery of certain other Southern counterparts. That and an extraordinarily good, consistently surprising cast and writing team.
The achievement of the '50th Anniversary Week' of episodes - including a flawless hour-long 'live' segment - is startling.
My own appreciation of this national institution may be detected between the lines of the accompanying sketchbook image. As with every other image here, if you click on it, it gets bigger.
Relish the detail and read the roll-call!
Posted by n16holson at 18:20 No comments: 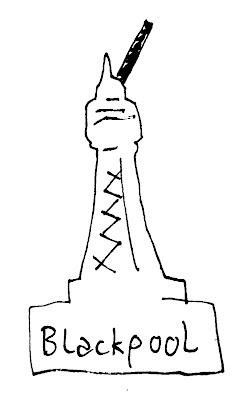 Writing that didn't make the edit for my current 'special project':

"My idea of the North, as a child, was more particularly loaded towards Blackpool, Manchester being a much greater and more inscrutable unknown of undetermined location, somewhere away over the hills near 'Coronation Street'.
Dad tells me that we visited the Pleasure Beach, and there's memory of that.
More vivid, through repetition, when we visited and shopped as a family towards Christmas every year; Mum and Dad, Nan (Mum's mum) and Auntie Jean (Mum's sister). And me.

Fragmentarily?
It was this:
The Tower, seen from the car or coach – the thrilling heave and chunter and bustle of the main covered market. Marvel Comics hanging from bulldog clips. The smell of hot, salty pies – the waft of them, the warm, savoury breezes from the shops that sold them. Fish ' n' chips 'n' mushy peas. Rain and cold wind. The Dr.Who Exhibition – a shabby portal to the imagination. Meeting up at the British Home Stores cafeteria with Nan and Jean after a couple of hours shopping - while outside the bright walls circled the 1960s and 70s. . . The compact, sugar-hit trifles in pots; blood red jelly, delicious and viscous custard and then, the least of it, the fluffy and tasteless cream dob at the top. Hated the flavour-free crunchy cherry above it.
The jolly, alluring crackle of white paper bags in sweet shops. Midget gems and Sour Apple sweets. Cough Candy.
A Funhouse mirror of a place.
A queasy mix of the sweet & soured.
Both savoury antidote and salty anecdote. . . 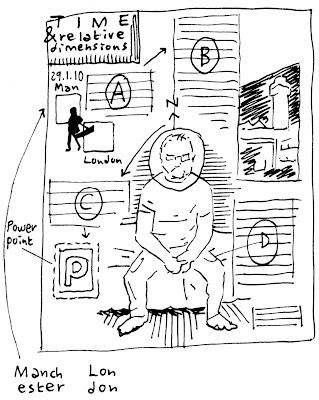 For my 3rd Sunday in this self-imposed schedule of work across February, I was back home in the Lakes with Mum and Dad, so final artwork wasn't practical to achieve.
Instead, I was both taking notes for the day – with which to create layouts and then final artwork later in the week for that day as part of the 'A Month Of Sundays' bio auto graphic edition – and ALSO making visual notes for a special project which must remain secret for now.
As a glimpse, here's a thumbnail of the potential opening page of four of that.

This is actually a good representation of my process as a whole - given many years of experience working to tight deadlines within publishing and TV/film industries, even when I'm dancing to my own tune I tend not to waste too much time prevaricating once I have the raw components (the things I want to say in a given page) in mind. I might have made a written check-list to refer to nearby in the sketchbook, but once the ink hits the page I tend to press on once satisfied.
I liked the look of this composition as soon as I'd set it down.
That kind of decisiveness comes with experience and a knowledge of your own skills.
Age, basically. . .
This is a really satisfying creative time for me and I'm having a ball.
Posted by n16holson at 02:20 No comments: 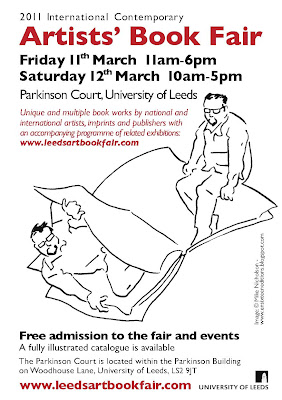 Should any of you be in the vicinity of Yorkshire - and more specifically Leeds - on 11th and 12th March, here's a note of the latest upcoming book fair.
This is the e-flyer received today from co-organiser Chris Taylor, using artwork from my prep work for the 2007 'In A Single Bound Volume Our Hero Is Free' piece (itself featured in the 'From Book to Book' exhibition at Leeds Art Gallery in March - April of that year).
As with all content here, click on the image to enlarge it.
The event is as usual masterminded by CT and John McDowell and has gained a pleasing character and new momentum since it's re-incarnation a few years ago from what used to be a smaller event over in Halifax.

It would be lovely to see any of you who may read this, and the new 'A Month of Sundays' edition (my 17th under the 'bio auto graphic' banner) will be available there for the first time. 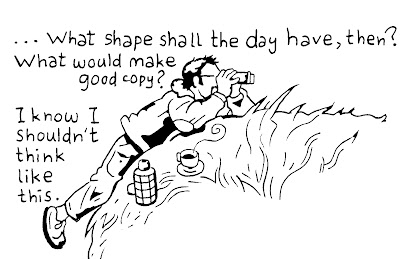 Second Sunday, 2nd taster image.
Really enjoying this. Have a good week.
M
Posted by n16holson at 15:57 No comments:

A belated Happy New Year to those rooting about in the Blogosphere.

It appears that January became a time and a space not conducive to posts of any kind. After three or so weeks dug in at the Nicholson country pile with the folks over Yuletide and New Year, I returned to teaching duties and other pressing matters in the capital.
Indeed, as well as the usual teaching mallarkey I currently have an article to prepare (a sequel to a paper I delivered at
'The Story of Things' Conference at Manchester Metropolitan University about a year ago) as well as a new storyboard commission for design gurus The Why Not Associates.
HOWEVER. . .
Today – the 1st Sunday of February, 2011 – I was hit with inspiration somewhere in-between the smoked salmon and cottage cheese on toast and the shower.
Leeds Contemporary Artist's Book Fair, 2011 (March) and Bristol Artists' Book Event 3 (April) loom, and I feel a new edition from the 'bio auto graphic' strand is called for.


I will draw from events on each Sunday this month, beginning today, and commit ideas to paper either on the days themselves or shortly afterwards. I'm already three pages in.