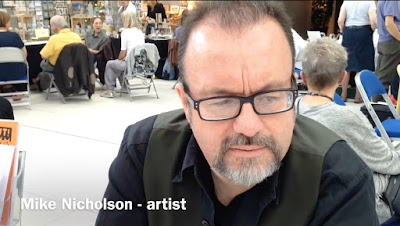 Last weekend's Turn The Page book fair event was rather enjoyable, despite my expression in the short clip featured by the venue's Facebook presence, which you can find here

In a rarity of a city (it voted to 'Remain' in the European Union where the rest of East Anglia didn't) there was much to discuss and shake heads about as the two days unfolded, but that wasn't the splendid selection of work that surrounded me.
That existed to raise the spirits.

My thanks to those that stopped to chat, browse and  - yes - even purchase from the Ensixteen Editions range on offer.
And to Jules Allen and the Turn The Page team. Staunch work! 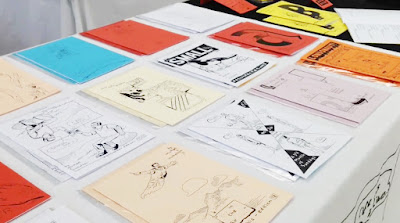 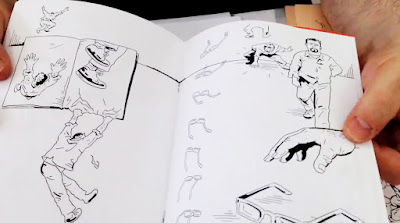 And now - another week, and reality bites again: the last visit of an ugly little braggart and his big ugly thoughts to Brussels, racist attacks on the rise – having been given seeming license by the vote of only just over half those who voted last week – headless poultry in Tory and Labour camps, and more suicide vests in airport lounges yesterday.

On the world and domestic stages. . . confusion and mistrust.

Whither Britain - our septic isle?

The Pencil Beneath The Ink

So - a new book fair is imminent.
The city of Norwich is ahead; familiar nooks and crannies and favoured places already in my head from past visits. An idea of Norwich made from these ephemeralities is held between my ears, sketched in before the reality of the solid cobbles beneath my feet and the wide Norfolk skies above my head.
Expectation and anticipation.
The pencil beneath the ink. 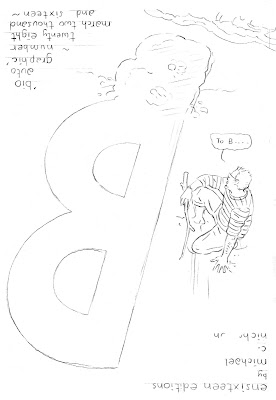 Past Lives, Past Lines 4

And this is Word World 2 – a word for every letter of the alphabet.

These two pieces - from 2006 - are absolute cornerstones to my interests, directions and agenda with what have been 28 issues to date. Playfulness, exploration, flying when I feel like it - or staying grounded and pointing a blunt finger if it's needed. . 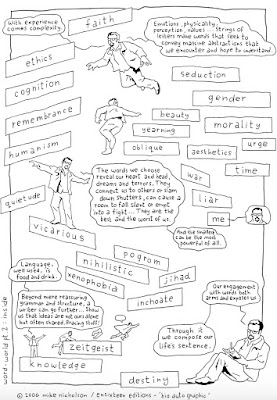 Past Lives, Past Lines 3

This was one of a pair, investigating our relationship to words & language.
It is called Word World 1 – an image for every letter of the alphabet. 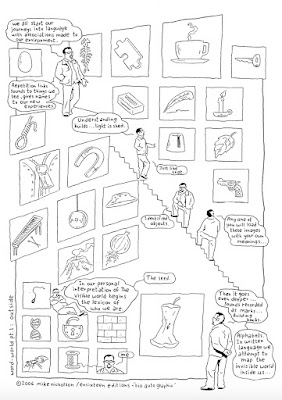 Past Lives, Past Lines 2 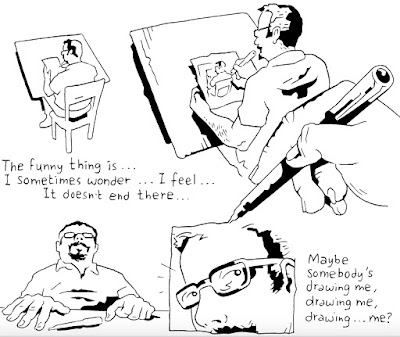 Past Lives, Past Lines 1

One of a series of fragments from earlier work across the whole series of my 'bio auto graphic' - all of which can be seen at the Turn the Page event this weekend in Norwich. This one's a shot of Issue 21 "On The Margins" courtesy of Nathan Penlington, who has reviewed the series extensively on the Syndicated Zine Review site here 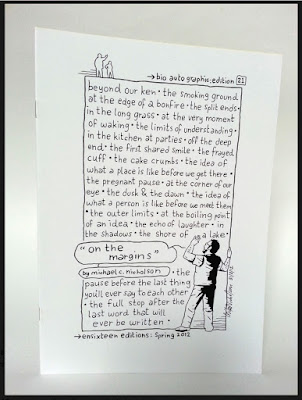 Click on the image for a crisper, larger version.

My latest edition - 'B is for. . .' will be available as well as the entire Ensixteen Editions back catalogue - open 10am til 6pm on Friday 24th and Saturday 25th. 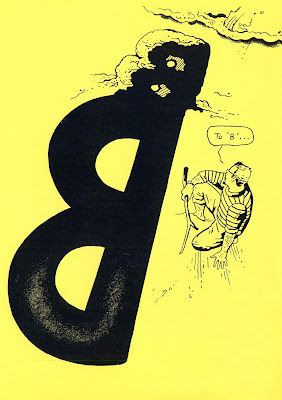