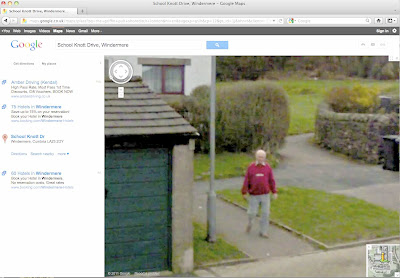 Remembered my Dad had mentioned seeing a 'strange car with some sort of camera on a stick on top of it' near the Nicholson Family Seat a couple of years ago. Found this on Googlemap. . .
Posted by n16holson at 06:09 1 comment: 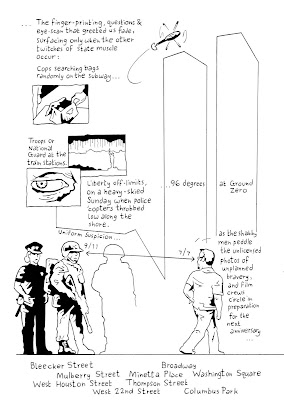 Here is the page from my 2006 edition 'Lettering From America Pt.1' which particularly referenced the events of September 11th, 2001. One of the two editions featured in the Smith College exhibition (see previous post). Click on it for a larger version.
The following is an edit of what I wrote to accompany the exhibition:

If my editions are about anything at all, they are about the way things connect.
I began the strand of personal storytelling I call 'bio auto graphic' with an edition entitled 'Issue Zero' in 2004. Fortuitously, the template was set with this modest trial. I had wanted the whole to be flexible enough to embrace shifting senses of memory and location, themes both grand and intimate. . .
The largest themes are reflected in the smallest events.
In Issue Zero, for example, I shift from a farcical domestic anecdote to the events of that week in early September, a day that would knock the world to its knees. I used the outline of the towers as a central element in the design.
In Summer 2005 I made a trip to the USA, beginning in New York. . . Events of the full trip would later become the trilogy of issues I called the 'You, Nighted States' sequence (2005 - 6).
I was again able to suggest the spectre of the fallen towers, in a section that referenced our impression of Manhattan going about its business in the shadow of the recent terrorist atrocities on London's public transport system.
Questions of how we live – practically and spiritually – in times of such raw suspicion and fear fuel this page.
As an adoptive Londoner I had seen the aftermath of half a dozen attacks, but this latest had proven particularly unnerving, and I felt it important to visit 'Ground Zero' while in NYC.
Layer upon layer of meaning surround us every day, and we interpret them how we will. This is like as not shaped by our personalities and belief system – and the latter doesn't have to involve a god.

We connect to the world and it connects to us.
In 1987 I had stood at the top of a Twin Tower and looked to the horizon. An abstract thought passed through my mind: 'What will happen if it falls down?"
I never thought it would – but it did.

And we all still live with the impact of that moment.
Posted by n16holson at 07:53 No comments:

Making an Exhibition of Myself - nothing new there then. 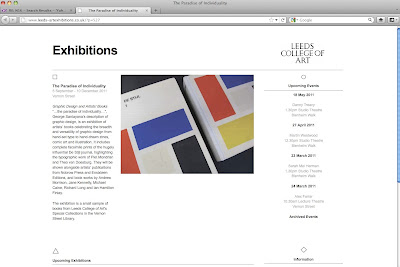 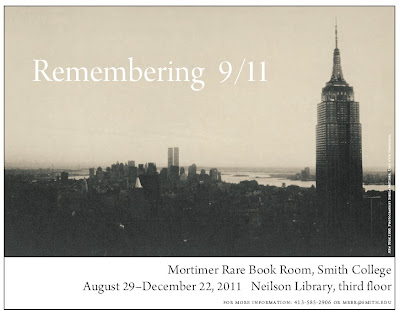 Just a note to self (after some breathless weeks of too much on and too little time to process it) and others who may be in either Leeds, Yorkshire, Engerland OR Northampton, Massachusetts, USA – to mention I currently have work in two exhibitions.

Barbara Blumenthal allowed me the privilege of having two of my 'bio auto graphic' editions included in the 'Remembering 9/11' show at the Smith College Neilson Library, and Rebecca Lowe at the Leeds School of Art Library did similar for their current 'The Paradise of Individuality – Artists' Books and Graphic Design' show.

People like these can be so important to the recognition and ongoing work of a book artist – and I'm certainly indebted to them.
They join my list of heroes alongside Jayne Burgess, Jonathan Carson and Jane Pendlebury at Manchester Metropolitan University, Linda Newington and Catherine Polley at Winchester School of Art, Diane McCourt at University for the Creative Arts, Maria White at Tate Collections, Elizabeth James at V&A National Art Collection, Michael Kasper at Amherst College and the maestro himself, Martin Antonetti (also at the Smith College Rare Book Room).
Sarah Bodman at UWE in Bristol remains superhumanly attuned to the book artist's lot and has always provided inestimable advice and support.

Friends to the cause all, and without whom. . .

Click on these images to see larger versions.
Posted by n16holson at 14:04 No comments:

Comedy Carpet – The Early Morning after. 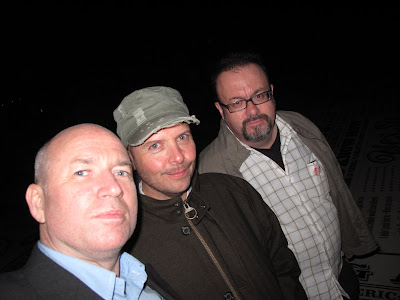 Photo by Mister Altmann.
Posted by n16holson at 11:27 No comments:

Comedy Carpet - The Morning of It. 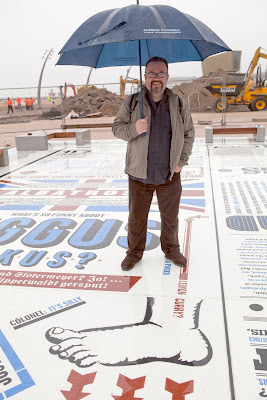 Here I view with undisguised pleasure a drawing wot I did - made granite;
my rendition of the classic Monty Python 'big foot' (with apologies to Terry Gilliam).

Photo by Why Not designer Clayton Welham.
Posted by n16holson at 11:23 1 comment:

It was one of the weirdest days I can recall - joining my dear pal Andy Altmann (and colleagues from the company he co-founded, Why Not Associates) for the launch of
'The Blackpool Comedy Carpet'.
This huge typographic pavement, heading out to sea from the base of the Tower itself, is very probably the biggest public arts piece since the Angel of the North. Every step underfoot carries catchphrases, sketches, banter and blather from the town's – and our nation's – long history of comedy.

A crowd – defying easy definition – gathered at the Tower for a reception on the appropriately windswept and rainlashed day.
A day when you genuinely needed a laugh, actually.
The Grand Poobah of British Comedy, Ken Dodd, anointed the day with a handy tickling stick and raised an appropriate titter or two.

It's been a long old slog for Andy and his collaborator, artist Gordon Young - pretty much 5 years - but there it finally was.
And, having built it, they certainly came; members of the public, their children and dogs, amassed journalists with dictaphones and cameras. . . All began reading it and enjoying it as soon as they could step onto it.
Laughter and recognition and the rediscovery of the familiar as the brown seas thrashed the Lancashire coast.
I enjoyed long chats with comedienne Hattie Hayridge – currently touring as part of 'Rory Bremner and Friends' – and esteemed comedy biographer Graham McCann, author of books on Eric and Ernie, Frankie Howerd, Dad's Army and Fawlty Towers amongst others.
Splendid folk.

National newspaper coverage began that morning, and local and national TV news caught up as evening fell.
Having relished an increasingly surreal afternoon in the grandeur of the Tower Ballroom – and refreshed ourselves at the hotel beneath the Pleasure Beach roller-coaster – we repaired to the evening celebrations.
The last laughs were had back on the Carpet, beneath the monolithic Tower, in the early hours.
Design meets art meets cultural heritage.
Old friends and new faces – the end of something and the beginning of it, too.
Sweet.
Posted by n16holson at 11:03 No comments:

ENSIXTEEN EDITIONS No.19 – The Physics of Violence 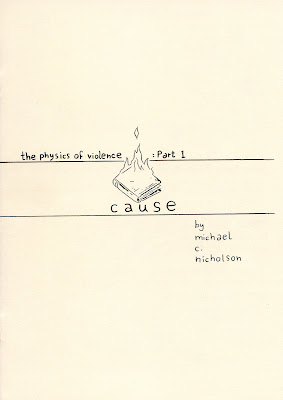 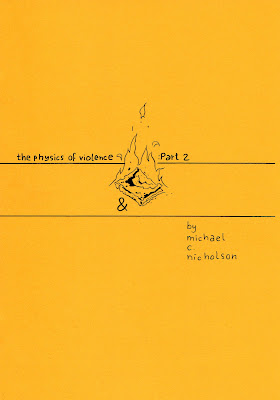 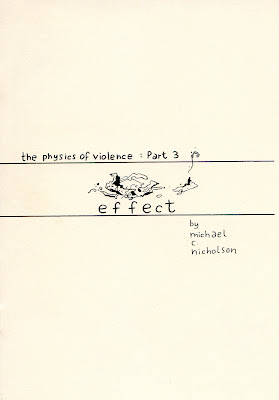 The three consecutive covers here for the latest Ensixteen edition. Click on the images to get a larger version, as ever.
The three-part set goes out – in alternate versions of a very fetching illustrated bellyband – as Ensixteen's 19th release.

Sophie Hallam, a new reader who picked them up at the recent Whitechapel event, emailed me:

"Just read the physics of violence and it made me shiver. Your writing and illustration create a very delicate and extremely powerful experience."

Clearly a woman of great taste.
Posted by n16holson at 04:59 No comments:

Messrs. Fowler, Bryant and May 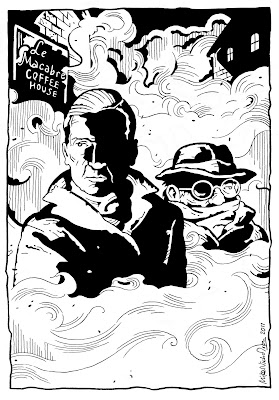 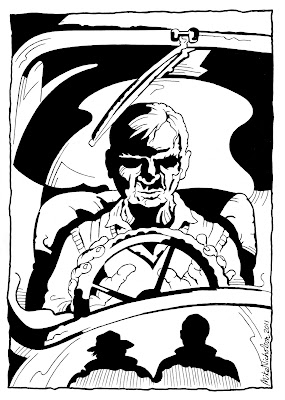 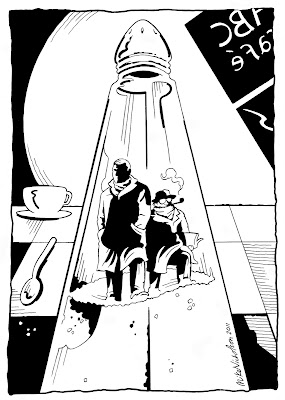 Author Christopher Fowler – amongst a prolific writing career continuing beyond the novel into theatre, interactive media and a marvellously labyrinthine blog (www.christopherfowler.co.uk) – has created the splendidly ideosyncratic detective duo of Arthur Bryant and John May.

Determinedly applying old-school sensibilities of 'copper-ing' to the unfolding madness of the 21st century's weirdest criminal cases these two ageless sleuths, colleagues and friends offer a window into the past, present and future of the metropolis.

The books - as does Chris's site – burst with the accumulated detail of London history, human hopes and despairs.

They're a charming, intelligent read.

Folding back upon myself – flashbacking to my career as an illustrator of other people's words – I asked Christopher if there were any B & M short stories for which I might create new images.

He emailed me a draft of 'Bryant & May in the Soup' – set in the crippling, claustrophobic smogs of 1952.

Here are the results, as concurrently featured on Chris's site.

As usual, click on the images to see them at a larger size.

This is for me like taking down an old and familiar jacket from the peg – revisiting the bold style of my magazine illustration days for the likes of 'Time Out' and the 'Guardian' newspaper.

His newest novel is just out: "Bryant and May and the Memory of Blood".

It's their ninth outing and I feel you may enjoy it.

Chris duly featured the images at his website after what was an enjoyable launch of the latest book.

What a nice man.