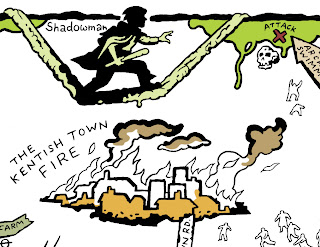 While Charlie and I agreed that it would be best to leave the look of specific heroes and villains to the imagination of his readers, it felt right to depict some key players in greater detail.

Here – representing his covert tracking of the monstrous army of adults led by the vile St. George across North London and beyond – we find one of my favourite characters; the secretive, determined, resourceful 'Shadowman'.

He's a fascinating addition to Books 3 and 4 in the ongoing series, and has some of the most gripping adventures so far seen as he observes, and inevitably tackles, the rise of the army.
Posted by n16holson at 22:51 No comments: 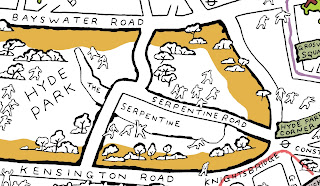 Not joggers taking to the leafy paths and greens of Hyde Park here, I'm afraid. . . just yet more ravenous adults looking for what they'd judge to be a tasty al fresco picnic treat – and I don't think it's sausage rolls.
RUN!!!!
Posted by n16holson at 15:20 No comments: 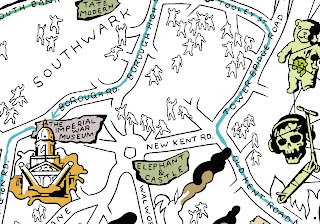 Here - fuelled by events in Higson's 3rd book in 'The Enemy' series 'The Fear' – we see what's unfolding South of the river Thames, as groups of kids gather at locations of relative safety. The Imperial War Musuem being one. Safe, or so they think. . .
Posted by n16holson at 15:16 No comments: 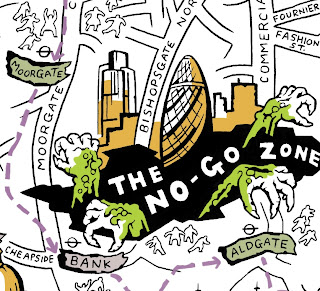 A fragment of my illustrated Map to show the nerve-wracking character journeys in Charlie Higson's 'The Enemy' series for young adults, published by Puffin Books (see previous posts). Click on the image to get a larger version.
Here it's not rampant City traders that are roaming the streets with a taste for expensive cocktails - it's the diseased and cannibalistic adults, devastated by the mystery plague that has hit everyone in the world over the age of 14. They do, however, like the traders before them, have very refined tastes. . .
Posted by n16holson at 15:10 No comments: