We stood where the two seas meet. . . 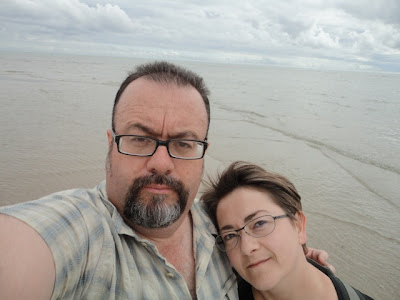 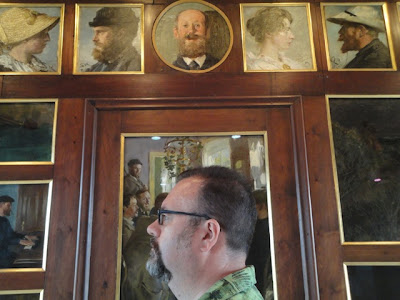 Here I join the other artists - of the surprisingly broad collective known as the Skagen Painters, who worked and caroused in the Northern Danish town of that name in the late 19th century - in a recreation of the local hotel dining room in which they gathered.
I need to work on the beard, obviously. 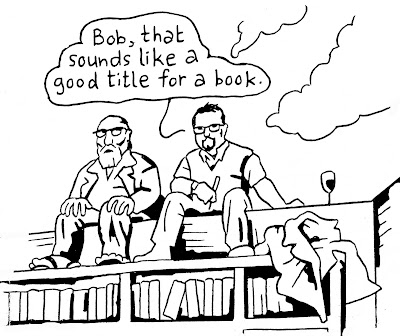 On a cold Friday lunchtime on Pitfield Street I did this. 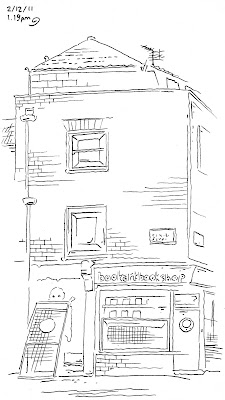 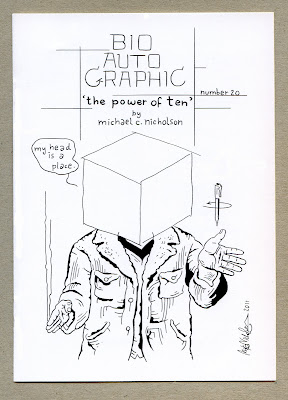 The inestimable Tanya Peixoto released a call-out to book arts types recently - to create a new edition in celebration of the tenth year of thebookartbookshop (that's the name of her domain, to be found at Number 17, Pitfield Street, London N1).
As part of this I have created my 20th edition in my 'bio auto graphic' series: 'the power of ten'.
Posted by n16holson at 01:49 No comments: 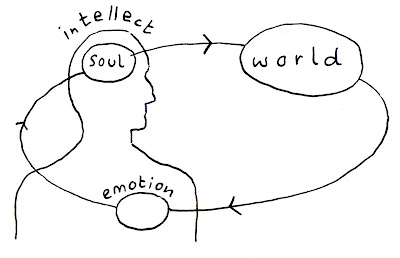 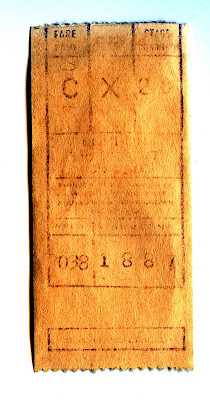 In 28th October 2005 Mette and I were fortunate to travel on the old Routemaster Number 38 - the final evening that it ran.
Better than that, for the occasion many of the older buses were out of the garage and running one last time. Ours was circa 1960s, I'd say.
The strangeness, the cultural memory of the dimmer upstairs lights, chair fabrics and handrails – all pleasurable details.
The once-mundane made exotic.
The ticket collectors were all in melancholy/jolly mood and issuing tickets for free.
Then came the Day of the Dumb; the 'bendybuses' – their farting and whinnying noises cutting through the dead of night near my flat. Years later - having facilitated millions of pounds of lost revenue in dodged fares - these red white elephants are gone and the 38 route will be the first to usher in Boris Johnson's latest woozy, post-lunch nap dream of London travel: the Routemaster Hybrid.
Whatever.
Posted by n16holson at 01:24 No comments: 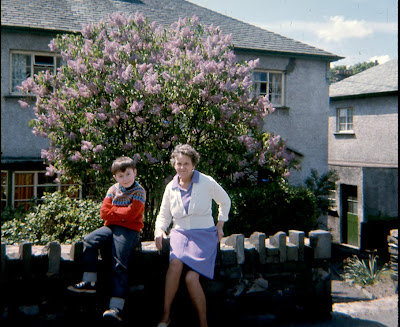 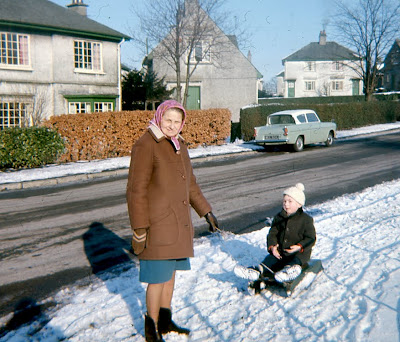 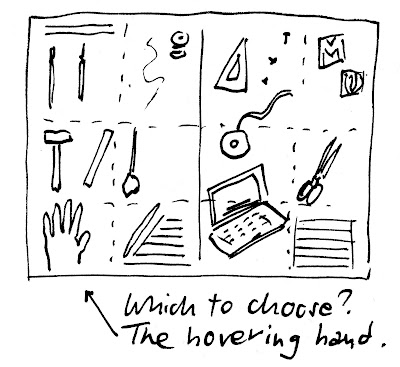 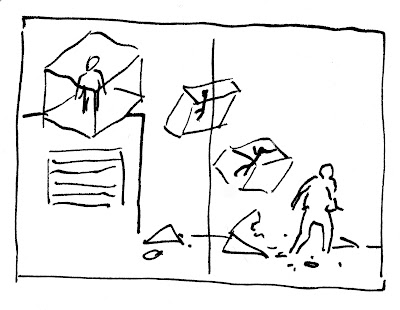 I have been working with noted designer/typographer and letterpress guru David Jury, as we plan a joint venture in 2012; an edition merging both our – very different – working methodologies and styles.
It's particularly exciting for me because David's relish of traditional print process and quality materials is a world away from what I myself exploit for my editions to date.
The piece will derive imagery and thinking from debates on what divides art from craft, and where qualities of one cross over into the other.

Her are a couple of my developmental rough sketches; ideas made into lines of ink that have then been scanned and made into pixels.
Posted by n16holson at 12:13 No comments: 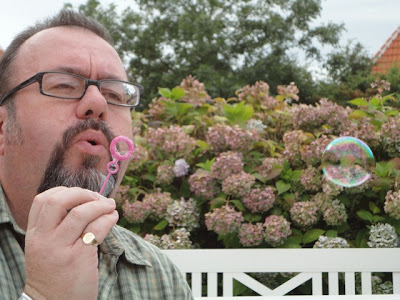 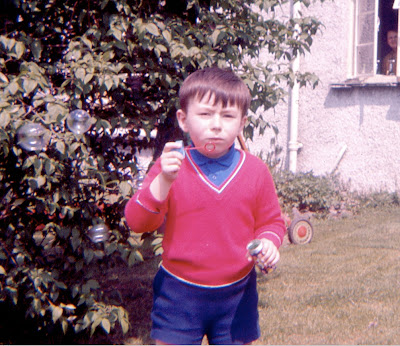 I have been scanning in a box of old colour slides that no-one in the family's seen for a few decades.

Here I am in one of these, whiling away my day in the garden of my Nan's house in the mid-1960s – and, in an image from Mette and I's trip to distant Skagen in late Summer 2011, doing much the same in the garden of our hotel.

Time's wing-ed chariot has run over me with around 45 years of wear and tear in the meantime, obviously.
Ouch. 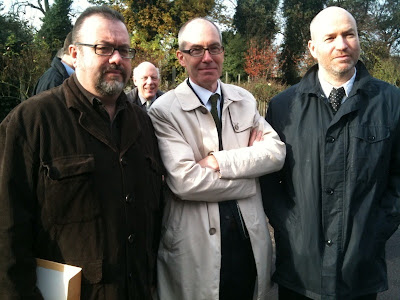 An image here showing that, occasionally, good things come from bad: a rare chance for the three ex-flatmates from 41, Queens Drive, London N4 - back when we were all at St. Martins School of Art and meat was cheap as they say – to reconvene.
They called it the 1980s, I've heard.
The sadness was that it was for the funeral service of another old, dear friend, Vicky Andrew.
To the left - yours truly. In the middle – Phil Baines (who I first met back on our Foundation Course in 1981 Carlisle, and is now a renowned typographic guru and indeed Professor of same in the Brave New World of CSM @ King's Cross). To the right – Andy Altmann (the man who I met on my arrival day at Ralph West Halls of Residence, Battersea in 1982 as we began to prepare for our degree the following Monday – we soon discovered we were born on the same day back in 1962, and have remained soul brothers ever since – he being a founding partner of Why Not Associates).

The roads we have travelled since have taken us very far and back again, and – while Life gets no less complicated and no less sad – it was good to be together once more.
The grinning presence in the background is Richard 'Dickie' Doust, our old tutor in those pre-historic days (who looks absolutely no bloody different 26 years later – extraordinary). 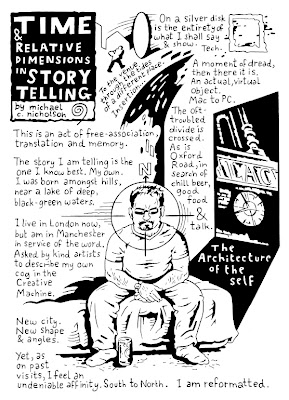 Here's the opening page from my visual essay – 'Time and Relative Dimensions In Storytelling' – (did you see what I did there?) as included in the new issue of 'image [&] narrative' (see www.imageandnarrative.be), an online academic online journal based in the Netherlands (it's part of the Open Humanities press).
Their remit is to cover 'visual narratology and word and image studies in the broadest sense'.

Guest editors of the issue (Vol 12, No 4 - ISSN 1780-678X) are Manchester-based artist/academics Carson & Miller, who hosted the 2010 Manchester Metropolitan University conference 'The Story of Things: reading narrative in the visual' at which I delivered the original paper on which this essay is based.
All articles are free to download as PDFs but my pages are also to be included in an upcoming 2012 edition. As usual you can click on any images here and they will enlarge for your reading pleasure.
Posted by n16holson at 02:37 1 comment: 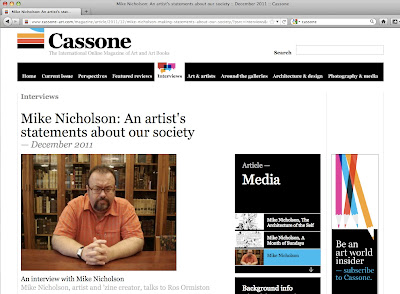 Thanks to London-based arts journalist Ros Ormiston – who I met originally at the September London Art Books Fair at The Whitechapel Gallery – for conducting an e-interview which has now seen the light of the pixelled day as part of the December issue of 'Cassone' (The International Online Magazine of Art and Books).
It's a subscription publication, but good to get the message of Ensixteen out there that bit further. Thanks, Ros.

Photo of yours truly at Smith College, Massachusetts © 2010 Mette-Sofie D. Ambeck
Posted by n16holson at 02:21 No comments: 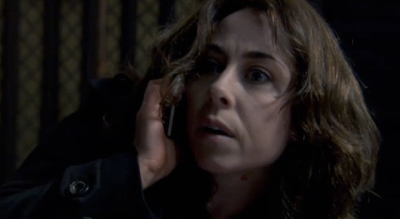 The intensity that is Sarah Lund, on the trail of another killer.
Splendid.
BBC 4 or - of course - the treasured iPlayer.
Posted by n16holson at 16:44 No comments: