BBC 3: Smaller on the Outside? 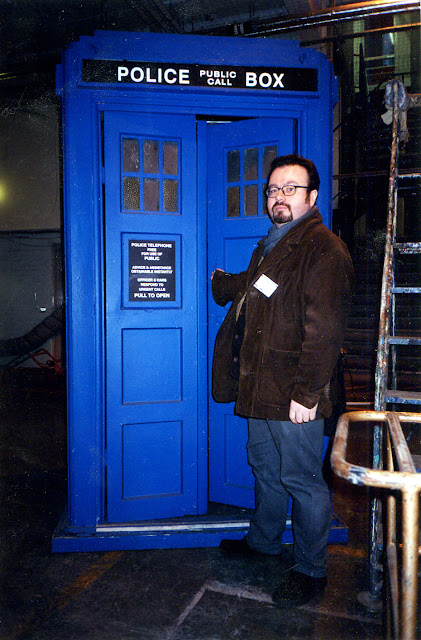 Through circumstances of friendship and career I later found myself as first a guest (tottering around  the legendary basement-level circular corridors to loo and back from many a 'green room' during filming of 90s comedy heavy-hitters like 'Shooting Stars' and 'The Fast Show') and then a visiting worker (capturing butterfly ideas from the mind's of comedy directors in production office closed sessions) at the BBC.
In an unlikely development my illustration career had morphed into that of storyboard artist and now I was inside the television creative process at last. The heyday of the boozy BBC was past, but there was still an amiable sociability about this new world to which I had been given a newly-minted key; from lunchtime storyboarding with Steve Bendelack for 'The League of Gentlemen' in the BBC bar, and – after finding a certain blue police box in the props hangar on another search for a toilet – returning to said bar to look out on an overcast West London Friday evening skyline with a very  funny man called Serafanowicz.
The photo here - taken during our stint on Tony Roche's 'World of Pub' – is by my oldest friend (and fellow Westmorland geezer) Michael Cumming (a man who had himself walked yesterday's circles of TV Centre in service to 'Tomorrow's World' at the start of a career that continues as I write).

Later – as 'Auntie Beeb'  committed to the nipping and tucking (and gutting and sucking – and outsourcing) of market forces – my BBC project work would be relocated to far-flung territories like the Three Mills Production facility in Bow ("Randall and Hopkirk (Deceased)" - 1999) or  - another cultural history posting in the making for another day - at rickety old Ealing Studios ("Randall and Hopkirk (Deceased)" - 2000).
My experiences of the Wood Lane BBC ended after a final period working with my old TV collaborator Mark Mylod in the themed glass cubicles (the 'Dalek Room' anyone?) and - blander still - 'soft areas' of their ghastly new (Soho adland wannabe) 'Media Village'.

The writing was on the (glass) wall.

From West London to the North West (of England) – the compass was spinning.
In the coolly air-conned boxes of the new BBC the idea the Corporation had of itself was breathing its last.

In many ways the circle closed last Friday evening. Even the British weather looked like it was registering disapproval.