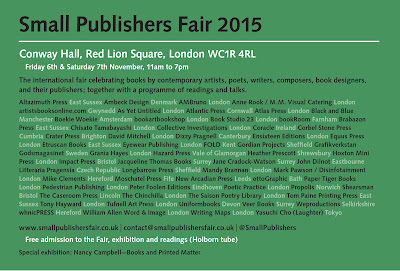 Check this out here or click on the image to get the detail.
Lots of good stuff and interesting people - listed here.
A rare exhibition by our dear chum Nancy Campbell included. 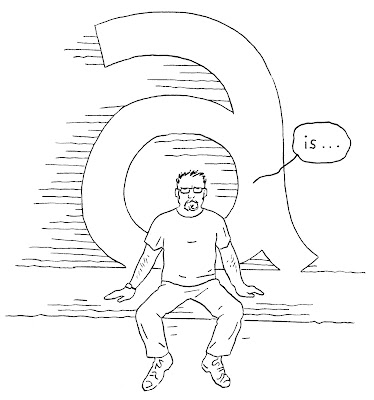 The Question or The Answer?
All may await in my latest 'bio auto graphic' - the 27th.
Available at the end of next week at a certain event that Mette and I have enjoyed lo these many years. See above. . .
Posted by n16holson at 14:04 No comments:

A charming fellow called Nathan Penlington has been kind enough to post several reviews of my editions on the international site Syndicated Zine Reviews. Here is a link to the posts so far.
Mister P, who is himself a writer, performer, magician, obsessive – and many more things besides – really seems to 'get' what Ensixteen Editions – and 'bio auto graphic' – are about.

His fascinating 'The Boy In The Book' – which I'm reading currently – touches and amuses in turn. 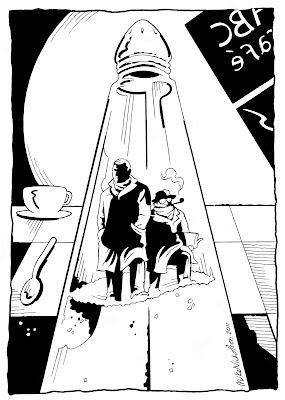 I just concluded 'The Burning Man', the latest volume in author Christopher Fowler's always-rewarding series of distinctively odd detective novels featuring (Arthur) Bryant & (John) May.
These are wonderful on character and convoluted, sinister plotting, and – as the aged/ageless pair investigate on behalf of the beleaguered 'Peculiar Crimes Unit' – they benefit from Fowler's endless knowledge of that extraordinary mystery that is London.

The city is the key character in the books, in fact.

Several years ago I illustrated a short story by CF featuring a certain resident of 221B Baker Street – this for the then BBC Cult TV website.

Later Chris was gracious enough to offer me a Bryant & May short story ('Bryant & May in the Soup' - set in the smog-bound world of '50s Soho) to play with - providing illustrations used on his masterfully entertaining blog (see here).

I particularly liked this one - click on it to get the full benefit.

PopCult (Music) 4: Burch in the Church 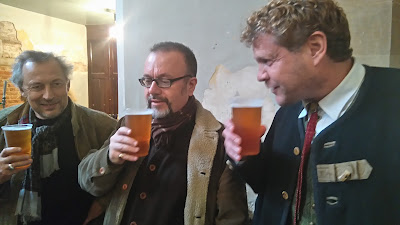 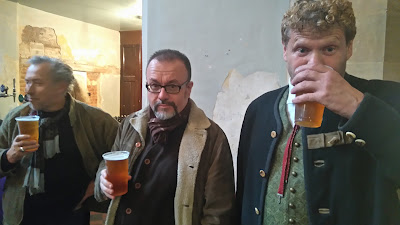 A convivial lost afternoon in the company of Stoke Newington's demi-monde recently, here captured at the olde St. Mary's Church on a dank day during the Music Festival.
Overpriced 'craft' beers and free-of-charge toe-tappers from legend Nigel Burch (banjolele and vocals), equally legendary Dylan Bates (violin) of the – undoubtedly – legendary Fleapit Orchestra and – for these clutch of songs today only – Adrian Stout, legend on a bass ukulele (he of double bass in the assuredly legendary Tigerlilies). 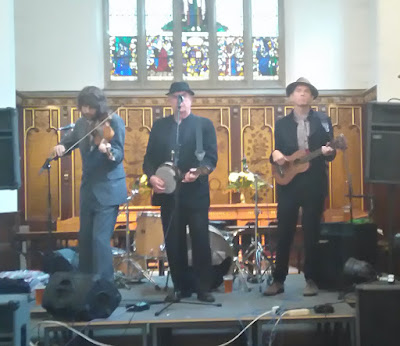 Not so much 'new town in the wood' (the apparent meaning of 'Stoke Newington' - it says here on this  internet) as old faces of the 'hood'.
Grand.

One of my favourite of Nigel's songs, 'Wee-Wee into Wine' can be enjoyed here. 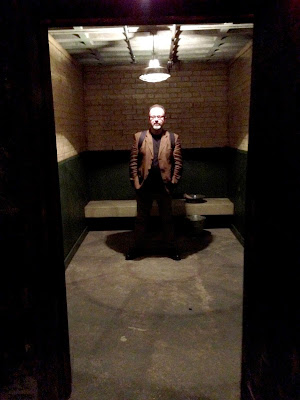 Due to see the BFI screening this evening for 'Jekyll and Hyde', the new twist on Robert Louis Stevenson's classic novel by my old friend Charlie Higson.
This first episode of ten – in what is intended to be an ongoing production – is on terrestrial TV this coming Sunday.

Here I am during last summer, keeping my chin up while in one of the dank underground cells in the facility run by Richard E. Grant's 'Bulstrode' and his covert organisation in the show.

Photo courtesy of Vick Fullick.
Posted by n16holson at 02:57 No comments: 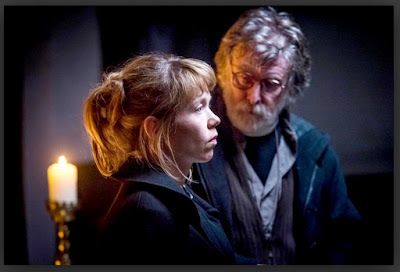 If you have a long-time investment in a fictional character and their world, as I do with author Phil Rickman's gripping series about Herefordshire 'Deliverance Consultant' (AKA 'exorcist') Merrily Watkins, it can be unnerving to hear that they are to be translated from the page to the screen.
Particularly in this case.
How to capture the eccentric blend of parallel criminality and spirituality, the subtleties of character and suggestions of an underlying battle for souls beneath it all? It's a weird English Pastoral Noir, almost a genre in itself.

With ITV's recent adaptation of Phil's second in the series, 'Midwinter of the Spirit' (1999) as a 3-part 'primetime' drama I was relieved – as were many other champions of this gifted writer's work across print and other media (including Radio Times TV reviewer Alison Graham) – that the transition was thoughtfully done, and ultimately a success.

Anna Maxwell-Martin may not entirely match the impression I have developed of Merrily over the last 17 years – and 13-ish novels – but that was highly unlikely to happen. She's a hell of an actress though.
Other characters have been altered to meet the criteria of current broadcaster's inclusive agendas, though to no particular ill-effect. There was strong direction from Richard Clark and a sympathetic script from Stephen Volk.
Among a strong cast David Threlfall was especially noteworthy as Merrily's gruff mentor, Huw Owen.

I have an email correspondence with Phil R. stretching back quite a few years, and it's been interesting to read his wariness shift to relief and – justified – pleasure at what happened with the show.
It would be good to see more.
The proprietorial feelings of the reader of the novels isn't going away – this still isn't quite 'my' Merrily. But it is provocative, unusual and well-crafted – like Phil's books.

So - highly recommended – and out next month on DVD.
Phil's 14th Merrily novel – 'Friends of the Dusk' is out in December.

Lots of interesting material about this and other work by the man here.
Posted by n16holson at 10:54 No comments: 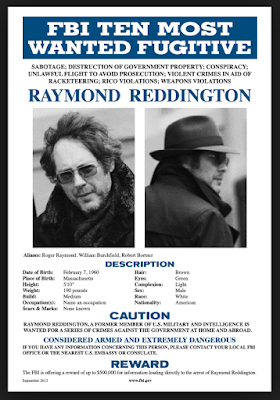 Well, a difficult act to follow after the 1st one, but I'm pleased to say the 2nd season of 'The Blacklist' – see earlier post – with the mesmeric James Spader proved just as enjoyable.

For those with a taste for high-concept pop culture this is confident, witty, clever stuff, mining that peculiarly American paranoid territory of secret governments within governments, subversives in good suits, dizzying betrayal and triple-crossings. Bold cinematic television storytelling.
In spades.
Spader – after the disorientating translation of his every facial and postural tic onto a 15-foot high android villain in Marvel's "Avengers: Age of Ultron" – wraps the black material of Raymond 'Red' Reddington's world around himself again with relish, it seems. 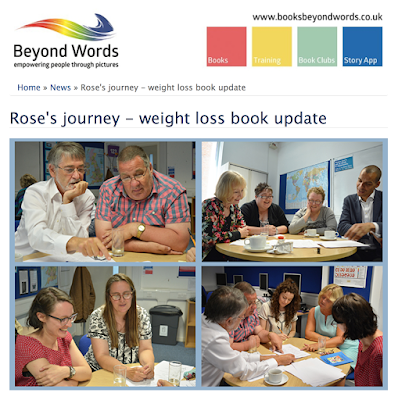 Here's a link to a piece by my current collaborators, the fascinating publishing company Books Beyond Words, covering the second meeting of the expanding 'advisory group' that is nurturing the book I'm illustrating (title TBC) on the hot topic of obesity and it's impact on society – and in this case with a sensitivity for those with learning difficulties.

It's a process unique in my 30 years as a professional illustrator; an artist, doctors, editors and varied other health professionals – as well as representatives of the intended readership – brainstorming what has become a book with around 50 illustrations.

This particular meeting, at which I faced the raw feedback from a roomful of people, many of whom were coming to the material (black and white line illustrations, prior to colours being added digitally) with fresh eyes - and opinions - was initially unnerving but ultimately very rewarding.

I have never been given a round of applause before, but I am vain enough to admit I enjoyed it. 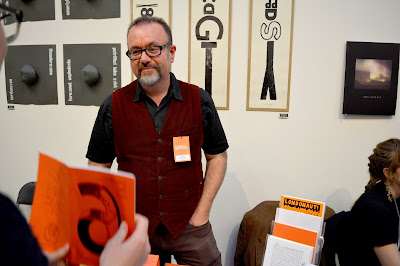 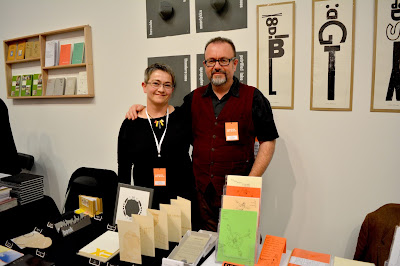 Once again the Whitechapel hosted an enjoyable and diverse London Art Book Fair last month.
Mette Ambeck and I exhibited side-by-side and greeted faces old and new over several days.

Here are three shots from the weekend - the pair above are © Peter Taylor 2015, who – along with Becky Skipwith – represented my current collaborators 'Books Beyond Words' (see previous post) with whom I'm creating a book due out next year.
The company ran a brisk article that weekend which you can find here and I'll be posting something else related to this soon. It's not all book arts!

The final image is by the lovely Lucy May Schofield, an old book arts chum who had returned from her travels in Japan to exhibit. Her work can be seen here.

Thanks to everyone who stopped by and who enlivened a long weekend, and to Max Vickers and the team at Whitechapel who pulled it all off with minimum hassle. 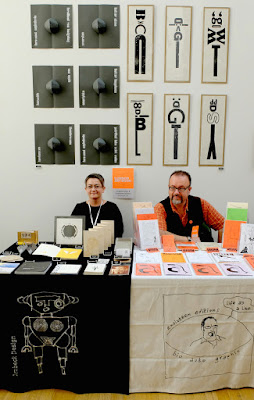 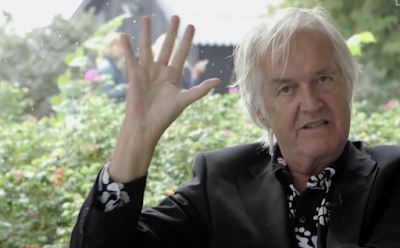 I was sad to recently learn that this thoughtful writer had gone.

The superbly dour and world-weary detective, Kurt Wallander – for me so definitively portrayed by the actor Krister Henriksson – was but one of his creations.

The world he portrayed was shot through with doubt, inhumanity and random bad luck, but in the tales of Wallander, and in his own insightful and compassionate ideas and words within interviews across the years, Mankell embodied an innate humanity.

He quoted a wonderful line from fellow Swede, Per Olof Enquist, in a final piece for The Guardian: