ENSIXTEEN EDITIONS - THE PAGE BEFORE THE FIRST PAGE. . . 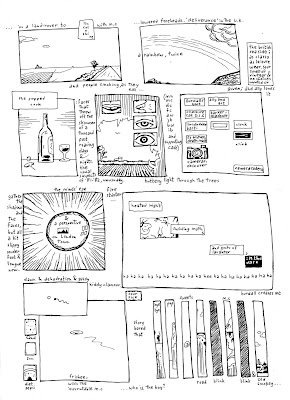 Here is the very first visual experiment I made that tips the hat towards the entire ongoing
'bio auto graphic' style of telling my own story.
In the good company of my oldest pal Michael Cumming (Westmorland-born two days after me and my neighbour in the maternity ward in the autumn of 1962 – now a director of televisual comedy for some years) I made a road trip in an open-top Landrover, up and across to Lincolnshire. We headed there to attend a grand weekend gathering of old pals at the home of David & Fiona Carruthers.
In this strange, flat, largely unknown land – unsettling when you're from land of hills and verticality – our storylines converged once again, laughs were laughed and the geographical distances that usually separated us forgotten. . .

After the fact – and using a spare line style that had surfaced in my work as a storyboard artist in recent years – I made this one-sheet impression of the experience.
I can't even clearly remember why I sat down and did it, though it certainly forms a foundation stone for an entire – enjoyable – working methodology with which I still tinker.

It was that tentative first step, and – as has often been the case – it was friends that somehow inspired me to take it.

My next few posts will show details of the above which, as here, you can click on to enlarge. . .
NB - If you read back through the next six posts in reverse order you'll get the original flow of the narrative as intended.