Sadly the St.Bride Event – as publicized at various points of the virtual compass, not least here (see below) – has been postponed until later in 2012, and so the new blog connected to it will thus appear as  the season of mists and mellow fruitfulness wraps its cooling arms around the post-Jubilee, post Olympicballs nation. 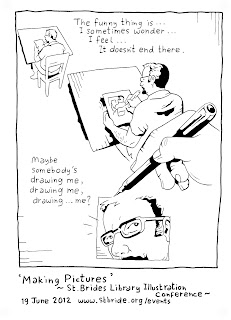 Attached here - a fragment from a parallel universe where this image publicized what was a fabulously popular event in mid-June, cracking open the much-misunderstood activity/profession/mindscape of illustration.
Posted by n16holson at 07:36