The strength of Glas? 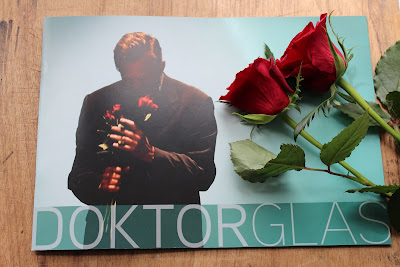 I have long admired the work of the Swedish actor Krister Henrikksen.
For me his is the definitive Kurt Wallander – in the Scandinavian dramas televised from author Henning Mankell's detective novels.
His inscrutable, wearied face suggested a world of unspoken emotion within a man amidst the darkest of events, and he has been rightly praised for this marvellous performance.
As well as the exciting prospect of his recently-filmed new episodes to come, I was intrigued to read of his West End debut and duly booked tickets for a performance last Monday at the Wyndham's Theatre.
In due course my own Scandinavian thriller and I headed into town on a busy, tourist-thronged Monday evening and were not disappointed.
As 'Doktor Glas' – the tortured, obsessive focus of Hjalmar Soderberg's original 1905 novel and now this powerful solo adaptation – Henrikksen proved captivating, unsettling company.
The curiousity of English 'surtitles' (translating the expressive mystery of the spoken Swedish) projected above the action was soon forgotten and the enjoyment of what was rather a tour de force remained, for the intense 90-minute duration.
It is a strange, bleakly funny, occasionally nightmarish, piece - laced with creeping loneliness and a growing murderous intent on the part of the good – or not so good – Doktor.
As well as the pleasures and subtleties of the actor's craft that so captivated the audience there was also a quietly brilliant set design by director Peder Bjurman, lit to extraordinary, beautiful effect by Linus Fellbom.

A marvellous evening, a rare journey into theatre (and a lovely building it is, too) for us, and – particularly – memorable work from Henrikksen that lingers in the imagination.

At the close the actor received a standing ovation and cast the blood red roses – a key part of the story – into the audience.