For my viewing pleasure 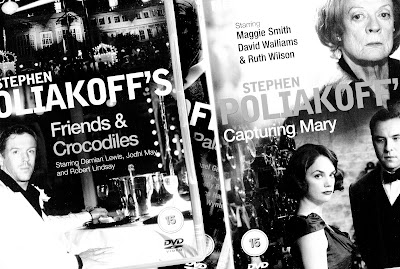 One of my recent forays into my stupidly large DVD collection – within which I tend to build little connected sections (by theme, or perhaps director or writer or actor) that I might watch successively – allowed me to relish three TV plays directed and written by Stephen Poliakoff:

What are his driving themes? What does Mister P concern himself with. . ?

Well. . . the plays return to certain issues again and again; identity and the back-story of cultural history behind all of our shoulders; the tides of time and how they shift our sands; the influences of power and privilege – or the lack of it – on our fate as individuals.

How new spheres of experience can change us – for good or bad – if we step inside them.

There's strangely dream-like, fairy tale quality to much of it.
Beneath the beautifully-realized recreation of historical periods, for instance, the characters slowly assume almost emblematic, symbolic roles that are bigger than reality.
The prelude to World War 2, the war years themselves, the bleak ravenous desires afoot in the Thatcher era – all these are inspected through the distinctive lens of the writer/director.

Dialogue – the exchanges between characters – can feel somehow timeless, possessing a secondary significance beyond the scene at hand should you care to play Poliakoff's game of meaning.
Yet these are also extremely British pieces, in many ways, populated by the finest actors of several generations – as well as instances where Poliakoff has used completely fresh talent.

For me the most affecting piece was 'Capturing Mary', with a memorably sinister turn by David Walliams as Greville White. In fact I was astonished at how quickly his performance wiped the slate clean of the familiarity one has for him in other comedic roles.

The story slips from what feels like reality – the happenstance of Life's chance encounters and how they alter us at a profound level – into unsettling places where time and space are toyed with to unsettling effect. It has the creeping discomfort of a nightmare in places.

It's marvellously disorientating stuff, crafted with care and immensely, immersively watchable.
And highly recommended by your author for the remaining Winter nights yet ahead.
Posted by n16holson at 05:17