Back to the making of the 30th edition - Chameleon Skin Coat - after a dissection of the talk I was to give at its Small Publishers Fair launch last November (numbered posts below 18 - 21).

The creative process being equally disjointed, I had come to the conclusion that the centre pages of the piece (a section I tend to keep as a place for a showy, eye-catching part of the whole, emphasizing the visual rather than the textual) would occupy a quiet, still point within the narrative.

Amongst the flow of the edition (that had already expressed the historical provenance of why I had started the series alongside activities as an illustrator, storyboard artist and academic, and what approaches I had taken in 'bio auto graphic' that reflected all of those career strands) I had decided I would give over the centre pages to a moment that summer when I had pulled back a curtain to witness a rainbow curving down into the dawn banks of fog on Windermere.

This was the window in a modest 70s-built semi that had literally framed my appreciation of the Lake District's hills since the age of 15.
Charting the sky as mood palette as with this photo earlier this month. 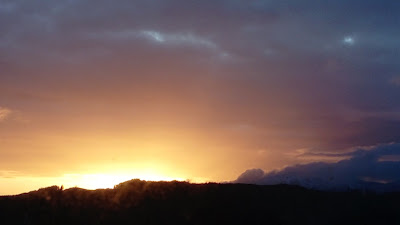